I am so happy to have Anne Belov of The Panda Chronicles and the recently released picture book Pandamorphosis as a guest blogger. Last week I talked about my love of pandas and Anne is one of the wonderful people I met on this journey! We are also collaborating on a book together 🙂

I’ll let Anne introduce herself and talk a bit about her work and our upcoming project!!

Connections: An Unexpected Treasure (With Frosting)

Generally speaking, I’m not known for playing well with others.

At least, not in my creative pursuits. I spent my art school years learning to be a painter, and as everyone knows, painters paint alone in their garret, living an isolated, tortured existence. Cutting off your ear is considered optional.

But then a funny thing happened a few years back: pandas entered my life and I became…um…obsessed with them. (For more about that, read my post on Cordelia’s Mom, Still: Where did all these pandas come from?)

Visual art was my thing, no illustrating, no cartooning, no printmaking, nothing but all painting, all the time, and stay out of my very private studio, thank you very much. I had absolutely no intention of becoming a writer.

The pandas made me do it.

Their voices invaded my brain, and I had no choice but to write down their words and the stories they told, and draw pictures of them, as they popped into my head. The Panda Chronicles blog, which features Your Brain on Pandas comics, sprang forth from my playtime with pandas. This eventually led me to write Pandamorphosis, my wordless picture book. Pandamorphosis brought my fine art training to bear (pun intended) and merged it with the comical nature of my …um…comic pandas.

So, while adrift on the internet, looking for readers who just might be looking for panda satire, something very unexpected began to happen: I started making connections.

In art, as well as music and in publishing, the game has changed. No more can the creative introvert sit in their tower, far above the clamor down below. The internet makes it possible, no, make that mandatory, that the writer connects with the crowds. Assuming, of course that the crowds have come calling.

I discovered something magical: the conversations and connections with my readers (OMG! I have readers!!!!!) help to feed and inspire me. My readers have embraced my bears with genuine enthusiasm. After all, who wouldn’t want to hug a panda? The more my readers cheer me on, the more I want to write new adventures for my cast of pandas (and one very annoyed cat.)

It is this cyberspace connection that makes these interactions easy, not to mention possible. And now, through this world-of-the-future marvel, I am about to embark on a collaborative project with my hostess here at VSomethingSpeaks.

Sometime towards the end of last year, Vicky approached me with the idea of writing a cookbook, based on the characters of Your Brain on Pandas. At first, I was a little skeptical.  After all, these are my pandas. But then she began to share some of the character sketches and recipes, with photos, (because of course if you are going to write a cookbook, you must test the recipes exhaustively,) and I began to see that she had a feel for my pandas, and would treat them with respect. We began to talk of a collaborative project, combining her recipes and writing, with my comics and illustrations.

Did I forget to mention that this is a cupcake, make that a cuppycake cookbook?

If you follow Your Brain on Pandas, you will be well aware that all the pandas are especially fond of cuppycakes, to the point of cuppycake obsession. So, you are hearing it here first: The Panda Chronicles Cuppycake Cookbook (favorite recipes from the panda kindergarten) is moving forward. Now that Pandamorphosis is out in the world, it’s full speed ahead as we develop our proposal and send out queries to agents. (What? You don’t have a copy of Pandamorphosis? It’s available on Amazon along with all the Panda Chronicles collections)

We hope you will follow along on our frosting filled journey. We’ll keep you updated on our progress here and over at The Panda Chronicles. 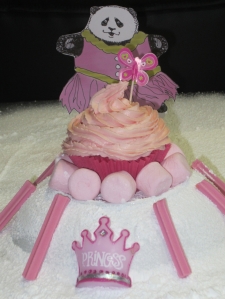 Anne Belov is a visual artist, cartoonist and writer living on an island in the Pacific Northwest. You can find her paintings at The Rob Schouten Gallery in Greenbank, WA, her cartoons on her blog The Panda Chronicles, and read her guest posts on Whidbey Life Magazine, an on-line journal of arts, food, and culture on Whidbey Island. Her book Pandamorphosis was funded by her third successful Kickstarter project. Her only regret in life is that there is no MacArthur Grant awarded for panda satire.

Make sure you visit Anne’s links!!

Thank you Anne for your wonderful words. You are so right about making connections!! Meeting people like you online continues to be one of the more rewarding experiences of being a writer, as is getting feedback and comments from the lovely people who stop by and visit.

I think a Cuppycake recipe may be in order next time 🙂