I saw my first puffin in Iceland in 2007 and immediately fell in love with these quirky little birds. At the end of 2007, I adopted my first puffin through Project Puffin, an organisation that helps restore puffins and other seabird colonies to islands in the Gulf of Maine.

Every year I receive an update of what my puffin got up to on Eastern Egg Rock Island over the past summer. Sometimes the news is happy and sometimes sad. I celebrate when my puffin’s chicks fledge, and cry when they don’t. The worst updates are the ones informing me my puffin didn’t return to the island. EN 53 was my first puffin, followed by the intriguingly named Q. Sadly, neither of these puffins have returned to the island. My current puffin is MR 795.

Since adopting my first puffin, it has been a dream of mine to travel to Maine and visit Eastern Egg Rock Island. Ten years after I adopted my first puffin, I fulfilled that dream. The best way to see the puffins and Eastern Egg Rock Island is on a puffin cruise. As I had traveled a long way to get there, I treated myself to a morning and evening cruise. 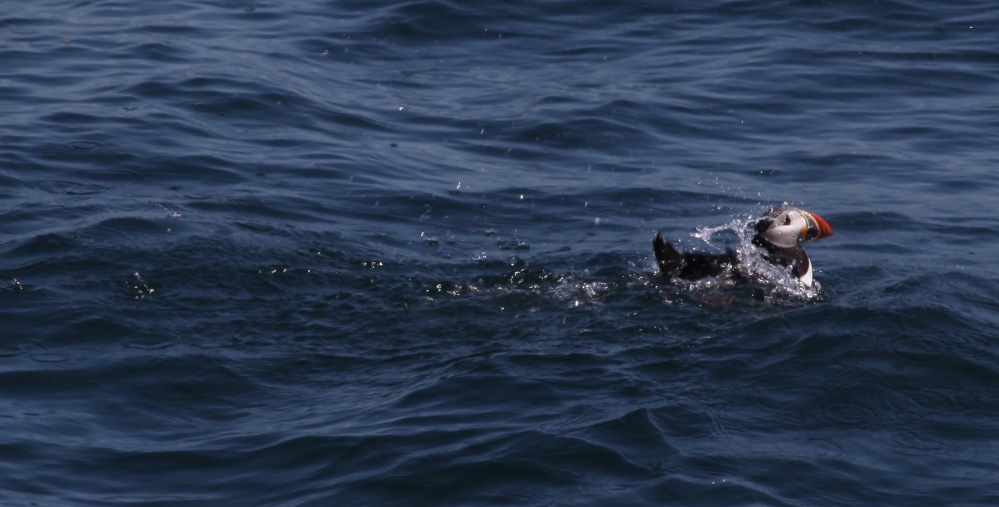 My first puffin trip was Cap’n Fish’s morning cruise which left from Boothbay Harbor. A Project Puffin staff member joined us for the trip and gave an informative talk. As we made our way to Eastern Egg Rock Island, puffins were spotted in the water. I leaned over the side of the boat and saw a group of puffins bobbing in the waves. They were so close! I watched as their orange feet paddled under the water and marvelled at the way they launched their black and white bodies into the sky. The closer we got, the more puffins we saw. There were puffins flying across the skyline, some with beaks filled with fish. We watched as they flew to the island and landed on the craggy rocks. We spent a good amount of time circling the island and watching the puffins go about their daily business before returning to Boothbay Harbor. 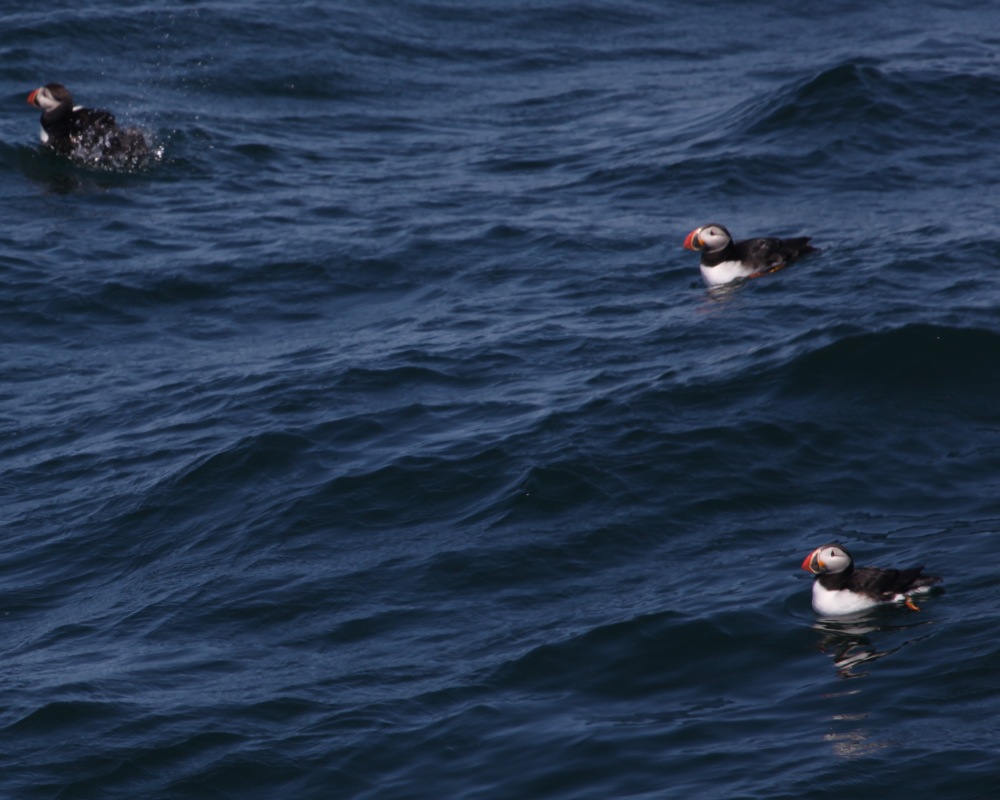 My second puffin trip was an evening cruise with Hardy Boat Cruises in New Harbor. We departed around sunset, so although the trip was similar to the morning one, it had a very different feel. Watching puffins fly across the sky at dusk was magical. Again we saw puffins bobbing in the waves close to our boat. When we we arrived at Eastern Egg Rock Island, we actually picked someone up from the island. We watched as a Project Puffin staff member was rowed to our boat, boarded, and then watched as the rower returned to the island. This was an unexpected surprise. I’m so glad I did both trips. 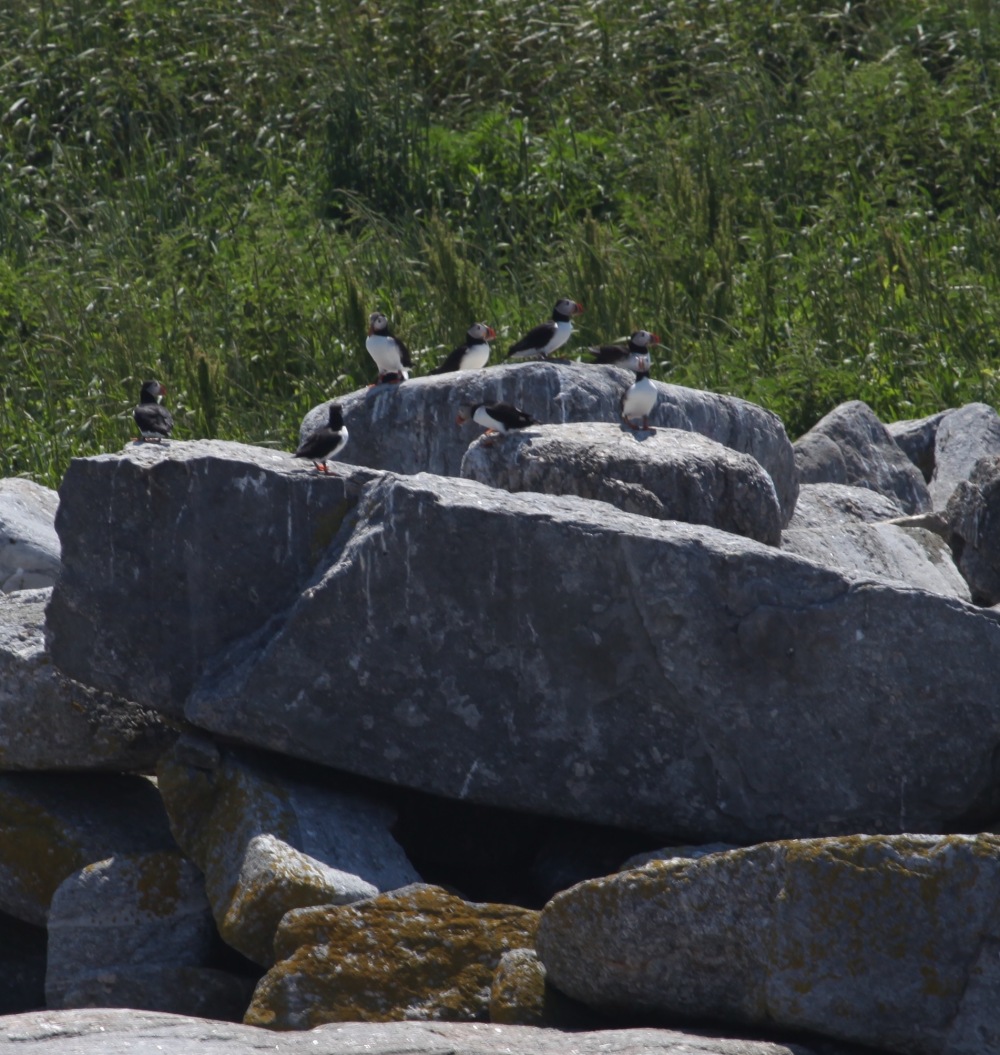 When I received my latest puffin adoption update I was happy to discover that MR 795 was at the island when I visited and successfully fledged a chick called A4 and adorably nicknamed “McFluffin.” I’ve already asked if I can adopt McFluffin if she/he ever becomes available 🙂

I love animals. I always have. From my earliest years all I ever wanted was animals. I loved visiting zoos, wildlife parks, petting zoos and seeing animals in their natural state was an absolute pleasure. I loved coming home to my pets. I loved playing with my stuffed animals and my animal models. My favourite board game growing up was the 1960’s Wild Life game; a game recommended by the World Wildlife Fund. When I left home I took that game with me. During my many moves I lost it and was devastated. But, thanks to the internet, 25 years after I lost the game I managed to find one in England. The day it arrived in Australia was one of the happiest. So many of my childhood memories were there in that one box. And yes I have played it again and again!

Although I loved all animals, one thing I didn’t have was a favourite. I wanted to have one so I tried ways of picking an animal that would be my favourite.

The Children of the Night

As a vampire fan from a young age I formed a bond with Dracula’s animals – the wolf and the bat. We are lucky to have fruit bats in Melbourne that fly through the night sky, just like bats in a Dracula movie. One of the local parks has colonies of bats that you can visit during the day. If you go there at dusk you can see them wake up and get ready for their nightly flights. Many an evening has been spent watching these magical creatures. It was a colony of bats living in the trees of a caravan park I was staying at in Sydney that inspired me to create the Dracula Tarot! 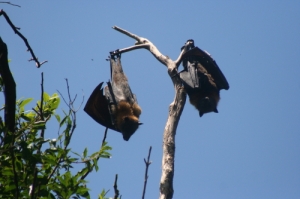 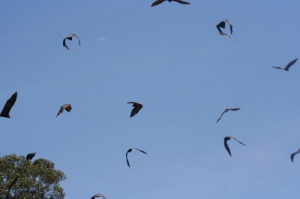 While we don’t have wild wolves in Australia, we have their domesticated brethren; the dog. It is through these pack animals that I have bonded with the wolf archetype. While I will one day write at length about my special pack of dogs, for now I need only say that I call them my WolfChildren from the WolfChild pack. My first two dogs – Batty and Wolfy – were named after Dracula’s bat and wolf 🙂

In Western Astrology I’m a Taurus and my animal is the bull. I researched bull and cow mythology which is quite fascinating. But while I liked them as animals, I just couldn’t bond with cows or bulls on a spiritual level.

I had a bit more luck with my Chinese animal sign which is the snake. Snakes are extraordinary animals mythologically. They are so extraordinary that I’ll be doing a separate post on their mythologies 🙂 But I will mention that snakes are linked to vampires – especially Dracula – which makes them very special to me!! 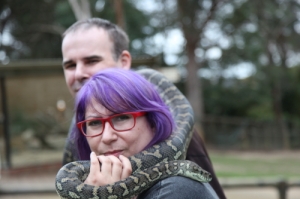 is that a python on your shoulder?

The main problem for me with snakes is that they are also creatures of fear when you live in Australia. We have 9 of the world’s Top 10 venomous snakes here so they are always in the back of your mind when you go outdoors in Spring and Summer. I’ve seen a few in the wild and they are magnificent creatures. But your heart always goes into overdrive as you wait to see what they will do. Usually they will leave you alone if you leave them alone – which is what I do! I’ve always said that I don’t fear them but I do respect them. That fear and respect was tested this year when a large, venomous tiger snake came into my yard!! While I waited for the snake catcher to come, I stayed in the yard with the snake – at a not so safe distance. I had plenty of time to reflect on this creature of myth, legend and fear. And I realised they really are scary! But I still love them – just not as a favourite 🙂

While I couldn’t find a favourite animal I found two that are very special to me; the red panda and the puffin.

I first encountered the red panda at Melbourne Zoo and it soon became one of my favourites. Whenever I went to the zoo I would go see the red panda first and visit it again before I left. I loved its red fur and adorable face. I thought it looked like a fox in a tree. There is even an International Red Panda Day which is celebrated on the third Saturday in September. 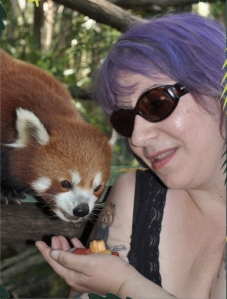 I became fascinated with puffins when I was lucky enough to go to Iceland for a holiday. Before the trip I researched the local fauna and thought they sounded interesting. When I first saw them on Grimsey Island I fell in love with their precious, serious little faces. They won my heart when I saw them fly. Their wings are so tiny that when they take off you think they are going to fall out of the sky. But they flap and flap those tiny wings and off they go! 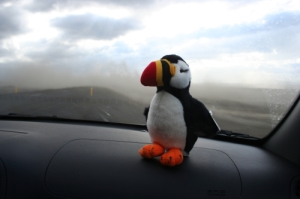 Two important animal organisations for me are The Red Panda Network and Project Puffin. Through them I sponsor a red panda and an Atlantic puffin. It is a lovely way to give back to these animals that have given me so much pleasure.