November 8th is Bram Stoker’s birthday. As I thought about Bram and his special day, I was drawn to the concept of birthstones and the magical attributes of gems.

During my research I discovered there was no consensus about which gems represented Scorpio. I also discovered that many of the gems chosen for Scorpio just didn’t feel right to me. That changed when I read Astrology for Wellness: Star Sign Guides for Body, Mind & Spirit Vitality by Monte Farber and Amy Zerner. They chose Obsidian for Scorpio with Onyx, Ruby and Black Opal as added extras. For me, these gems sing with the essence of Scorpio. These dark and gothic gems inspired me to come up with my own choice for a birthstone for Bram Stoker that symbolises both Scorpio and the dark world of Stoker’s most famous creation, Dracula. The gemstone I have chosen is Jet, in particular, Whitby Jet.

Jet is an organic gemstone which is naturally formed from fossilised wood. It is such a beautiful and intense black colour that it inspired the terms “jet black” and “black as jet.” Jet is smooth, lightweight and can be polished to such a high lustre it can be used as a mirror.

Jet was used in Roman Britain to make jewellery such as hair pins, pendants, necklaces, bracelets and rings. The Romans also made amulets and talismans out of Jet as they believed it contained magical protective properties and could ward off the evil eye. Pliny the Elder believed that Jet could drive away snakes.

Not only is Whitby Jet associated with the Victorian Era and mourning, but Whitby is the place where Dracula first lands in England. As a Victorian author and creator of the world’s most famous vampire, Whitby Jet is the perfect birthstone for Bram Stoker.

With my mind on gems, I knew exactly what I would make for Bram’s birthday – gem scones. These delightful treats are not actually scones but light little cakes. Gem scones are traditionally baked in cast iron tins called gem irons but shallow patty pans are good substitutes. They are great served with butter, cream and your favourite jam or preserve. I’m using blackberry jam to reflect the black gemstones associated with Scorpio.

Instructions
Preheat oven to 200C / 400F.
Grease your gem iron or patty pan and heat in the oven.
Mix together all the ingredients in a bowl until they form a slightly runny batter.
Carefully remove muffin tin from the oven.
Dollop batter into the holes, filling each about 3/4 full.
Bake for 7 to 10 minutes or until springy to the touch.
Serve warm or cold.

Dracula author Bram Stoker died 103 years ago on April 20th. Twice a year, on Bram’s birthday and death day, I think about the author and his infamous vampire creation Count Dracula; two of the greatest influences on my life. This deathiversary got me thinking about death and cookies, two other great influences on my life 🙂

After the death of her beloved husband, Queen Victoria wore nothing but black for the rest of her life. Mourning jewellery became fashionable, and jewellery containing the hair of dead loved ones was popular. Queen Victoria particularly favoured jewellery made from Whitby jet for her mourning dress. Is it a coincidence that Dracula first lands in Whitby when he travels to England or is it a nod to the Victorian Queen’s favourite mourning gemstone? I don’t know. What I do know is that during Queen Victoria’s reign, mourning became an art in itself. And that brings us to cookies!

Funeral cookies have a long history and are part of the customs related to eating food for the dead. Funeral cookies were essentially edible offerings that were handed out at funerals. They could be eaten at the funeral to honour the dead, eaten as snacks on the way home from the funeral or given as treats to those who couldn’t attend the funeral. They could also be kept as mementoes of the day.

In Victorian times, homemade cookies were replaced by bakeries who offered made to order products on short notice. The evolution of printing technology allowed bakers the opportunity to package cookies in creative ways. Cookies could be wrapped in ornate wrappings containing printed information such as the funeral notice for the deceased, biblical quotes or poems. The Funeral cookies could then be used as funeral invitations with all the funeral details printed on the wrapper. If you were particularly peckish, you could even snack on them on the way to the funeral!

I loved the quaint idea of a cookie wrapped in a funeral invitation so much that I decided to make my own version of traditional funeral cookies. My version is a shortbread style cookie flavoured with caraway seeds, which are a traditional spice in old-style cookies. I have added rosemary as it symbolises remembrance and is therefore associated with remembering and honouring the dead. I have also used a cookie stamp to give them an ornate appearance. 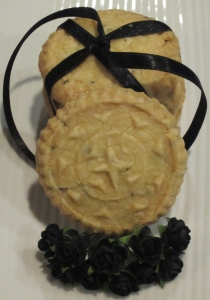 Instructions
Mix together the flour, cornflour, salt and caraway seeds.
In a separate bowl cream together the butter, icing sugar and rosemary until smooth.
Add the flour mixture and beat until combined.
Refrigerate for 1 hour.
Line two baking trays with baking paper.
Roll dough mixture into balls.
Press into biscuit stamp lightly dusted with cornflour.
Place on prepared trays.
Continue until all mixture is used.
Place trays in refrigerator for 15 minutes.
Preheat oven to 150C / 300F
Bake for 20 minutes or until lightly browned.
Allow to cool briefly before placing on a wire rack to cool completely.