Thursday the 22nd is the Summer Solstice. It is the midpoint between Beltane and Lammas. The Summer Solstice celebrates the longest day of the year. After the Solstice, the days will slowly get shorter as the night begins its journey into ascendancy. Day and night will finally become equal at the Equinox. For now, the southern hemisphere will be enjoying/enduring some very hot weather.

In the northern hemisphere the opposite is happening. The Winter Solstice is the midpoint between Halloween and Imbolc. The Winter Solstice celebrates the longest night of the year. As Winter is a very dark time, naturally there are a bevy of scary legends to chill your Midwinter soul.

For those of us celebrating the Summer Solstice, we may have to get creative to add darkness and gothness to a festival celebrating the Sun at its most powerful point. Or do we? After a quick dance through the internet I managed to find a pretty scary Midsummer tradition. Well it’s particularly scary if you are a witch!

In some Scandinavian countries, the Summer Solstice is tied to the birthday of Saint John the Baptist. On the eve of his birthday, fires are lit to ward off any evil sprints that may come calling. As part of the celebrations, a large effigy of a witch is burned. Sometimes the witch is filled with firecrackers. One writer suggests that the sound of the exploding firecrackers mimics the sound of a witch screaming. Okay, this isn’t sounding good. I need to find another way to goth-up Midsummer.

If burning a screaming witch effigy doesn’t appeal to you either, then maybe you can add a bit of darkness to the light by joining me in celebrating Gothmas! Gothmas is simply a dark and gothic Xmas (think Halloween but with Xmas decorations) and it is fast becoming a tradition in both hemispheres.

This is the first year that I’ve started collecting Gothmas decorations and so far I have a witchy advent calendar with a cute fox date marker, a black Santa hat, and coffin shaped Xmas present earrings in Xmas colours. I even got a surprise Gothmas present as the earrings came with a “Merry Gothmas” tote bag!

As this turbulent year finally winds to its end I would like to wish everyone a Happy Gothmas and a Harpy New Year! (Yes I did mean Harpy) 🙂

The recipe I’m using is from A Gothic Cookbook by Ella Buchan and Alessandra Pino. A Gothic Cookbook is being crowdsourced through Unbound so hopefully it gets fully funded because I want a copy! The book is beautifully illustrated by Lee Henry and features recipes inspired by classic and contemporary Gothic novels such as Jane Eyre, Rebecca, Rosemary’s Baby, Frankenstein and one of my favourites – Dracula. You might assume I’d be making a recipe inspired by Dracula, but the gingerbread cake recipe is actually inspired by Rebecca by Daphne Du Maurier.

That Very Special Gingerbread
I followed the recipe below without making any of my customary tweaks. I was briefly tempted to try a different icing, but I’m glad I didn’t. The lemon icing was tart and refreshing and complimented the deep treacle flavour of the cake beautifully.
(You can use molasses or blackstrap molasses if you don’t have black treacle)

My partner and I tried our best to eat all the cake but it was looking like we would fail. I was planning to freeze the leftovers, but then realised I could use the leftover cake to make a quick and easy Summer Solstice treat – Gingerbread Ice Cream!

Instructions
Mix the cake and ice cream together in a bowl.
Place in a container and freeze.
That’s it!
There are no measurements for the ingredients so you can make as much or as little as you want. You can also add as much cake to the ice cream as you like.

Monday December 21st is the Summer Solstice in Australia. It’s the longest day of the year and the midpoint between Beltane and Lammas. The Summer Solstice is a time of magic and mystery, a time when the veils between the worlds are thin. It is a time to celebrate summer, life and love.

After the solstice, the days start to get shorter but there are still plenty of long, hot days and nights ahead of us.

To cool down during the longest day of the year, you can make a lovely Summer Solstice drink by steeping strawberries and basil in wine. Play around with the proportions to fit your taste. You can also adapt the recipe to make a smaller or larger batch.

This wine can also be served for the Winter Solstice, as red and green are the colours of Yule.

Instructions
Place the strawberries and basil in a large pitcher or jug.
Pour in the wine.
Cover and refrigerate for 1 hour.
Pour in the soda water just before serving.

The Summer Solstice occurs near xmas in Australia, so while I’m getting ready to celebrate the longest day of the year and the shortest night, most of the stores are selling produce geared towards a winter feast day. I don’t mind, as I always look forward to the range of new shortbreads that are only available during xmas.

One of the other winter treats I used to enjoy at Summer Solstice was a Persian fruitcake filled with plump fruits and crunchy nuts and delicately flavoured with rose water. It was one of the most delicious fruitcakes I had ever tried. Every xmas I eagerly waited for the fruitcake’s arrival at the store until one year it wasn’t there and it never returned. That was almost two decades ago.

A few months ago I went for a country drive to Malmsbury Bakery, famous for its homemade Dundee cake. I was keen to try to this Scottish fruitcake as it was rumoured to be a favourite of Mary Queen of Scots. Queen Elizabeth II is also reported to enjoy Dundee cake at teatime. A cake fit for royalty was something I just had to have!

The cake was quite large, but I was assured that once opened, it would keep for months in an airtight container. I wasn’t sure how long it would last but I was happy to take a chance. As I cut a generous slice I noticed how large and plump the glazed cherries were, which immediately brought back memories of my cherished Persian fruitcake. I took a bite and was rewarded with the flavour and texture of one of the best fruitcakes I had ever tasted. This was as good as the Persian fruitcake.

The cake lasted weeks and I enjoyed every slice. With only a few slices left I decided to make a bold experiment. Could I add a rose water element to a slice without ruining it? I had to try. At first I was going to sprinkle rose water over a slice but I decided to make a rose water icing instead. I simply mixed icing (powdered) sugar with rose water until it was thick enough to drizzle and then drizzled it over my slice of fruitcake. While it wasn’t my coveted Persian fruitcake, it was floral and delicious and brought back many happy memories of solstices past.

In keeping with the xmas spirit I also dunked a few pieces of shortbread into the rose water icing and then let them set. Happily they were a delicious success as well.

The Summer Solstice in the southern hemisphere this year falls on Friday the 22nd of December at 3:28am. On the Summer Solstice, the sun reaches its zenith – its highest point in the sky. It is our longest day of the year.

As part of my summer celebrations, I went to a berry picking farm to load up on fresh berries. I bought enough to enjoy a few days worth of fresh berries and plenty to freeze for the rest of the year. As I was about to pay, I saw some strange white berries on the counter and asked what they were. They were whitecurrants. The staff said you could eat them just like that but that most people bought them to make sauces with. I’ve eaten redcurrants, but never whitecurrants, so I bought a punnet to see what they would be like.

On the drive home I started thinking of how I was going to use them. I was originally going to make a whitecurrant version of a redcurrant sauce, maybe with a bit of apple or apple juice. But when I tasted a few fresh ones, I quickly changed my mind. These tiny berries packed a punch with a tart sharpness mellowed by only a hint of sweetness. My first thought after tasting them was they would go great with gin and tonic! I immediately started thinking of the many ways I could play with a gin, tonic and whitecurrant combination. After a little experimenting and the addition of apple juice, I came up with a surprisingly delicious and refreshing concoction – perfect for the Summer Solstice.


Instructions
Place the whitecurrants and apple juice in a blender and blend until smooth.
Strain into a jug.
Stir in the maple syrup.
Divide the gin between two glasses.
Pour the juice evenly over the gin.
Top up with tonic water to taste.

It’s time for those of us in the southern hemisphere to get ready for Midsummer! Wednesday 21st is the Summer Solstice, our longest day/shortest night of the year. While the northern hemisphere is preparing for their cold winter, we are getting warmer and warmer as we move into our summer. Since the Winter Solstice, the days have become longer and the nights shorter. When we reach the Summer Solstice, this reverses. Our longest day heralds the beginning of shorter days and our shortest night gives birth to longer nights.

There was a time when I dreaded the arrival of summer but those days are gone. Over the years I have made peace with my solar deities, although I still hate the really hot days and long, oppressive nights that our summer can throw at us. I have learned to love the days when the weather is beautiful, warm and sunny and you just have to go outside and enjoy it. I’ve also come to appreciate the pleasantly warm nights where all you want to do is relax with a sparkling drink and wait for the night to slowly cool.

So with thoughts of outings and get-togethers with friends, I would like to celebrate the Summer Solstice with a sweet and golden Sunflower Seed Brittle. This sugary delight can be used to decorate cakes and desserts or eaten as is. 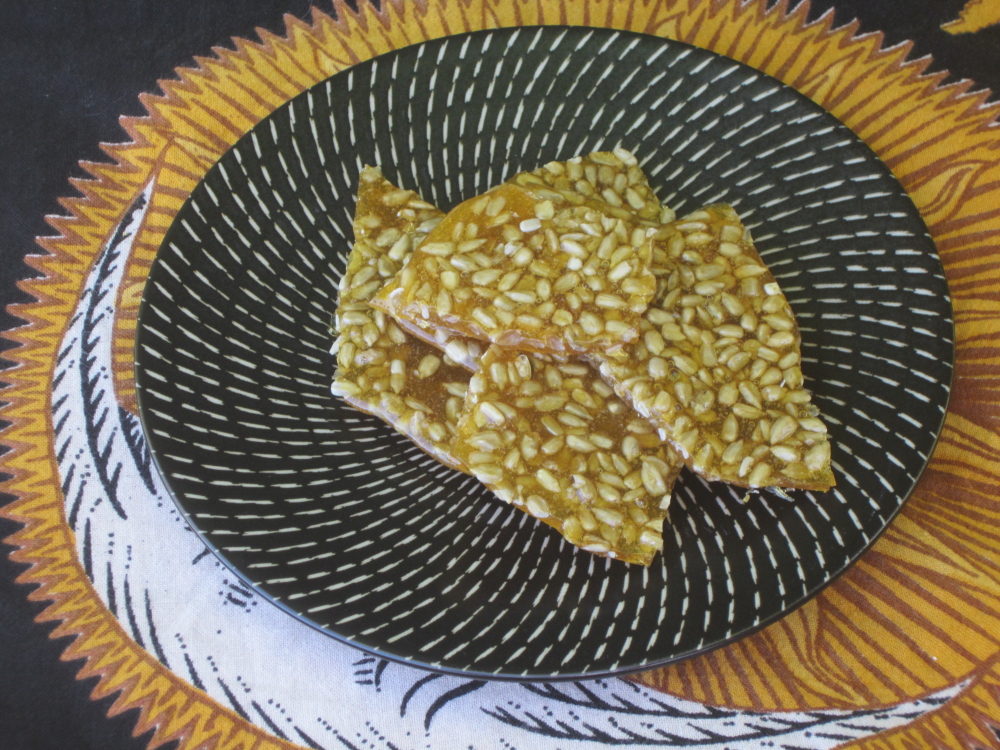 Instructions
Line a baking tray with baking paper.
Place the sugar in a saucepan over medium heat.
Stirring constantly, cook for 5 – 10 minutes, or until the sugar dissolves and caramelises.
Remove from heat.
Quickly stir in the sunflower seeds.
Pour onto prepared pan.
Allow to cool completely before breaking into shards.

If you like sunflower seeds, check out my recipe for Sunflower Seed Baklava. 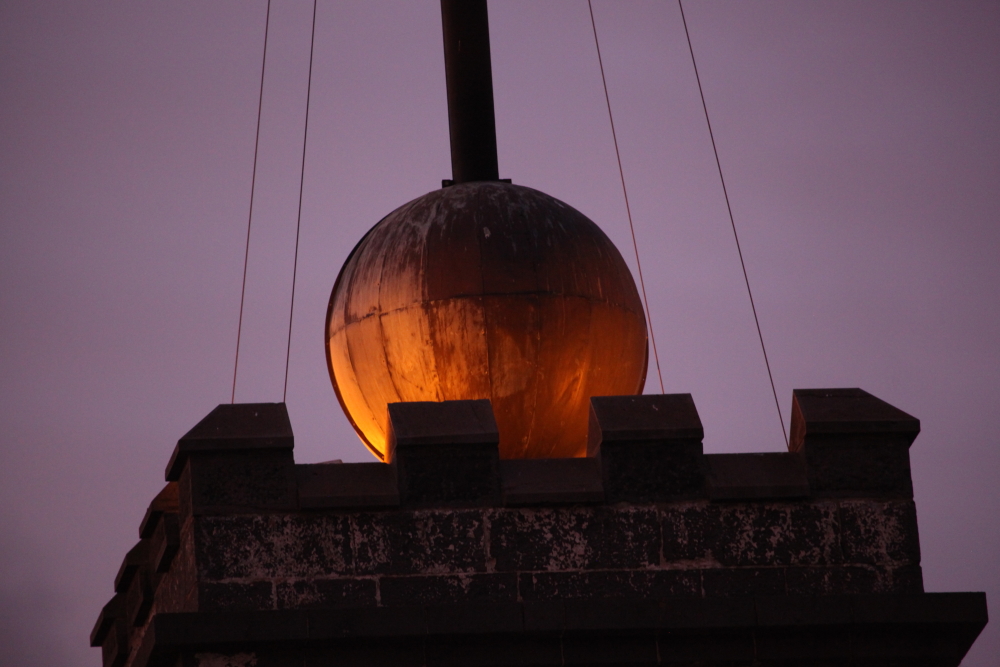