Because I could not stop for Death —
He kindly stopped for me —
The Carriage held but just Ourselves —
And Immortality.

“The Chariot” by Emily Dickinson

I left school when I was young but returned six years later to finish high school. I was delighted when the first poem we studied in English Literature was “The Chariot” by Emily Dickinson. Those opening lines haunted my mind and wound their way into my soul. When it came time for me to tell the class what I thought, the only person surprised at how much I loved the poem was our teacher. With scorn in her eyes she looked at me and said “I hope you are not one of those people who romanticises death?” Ummm …

My mouth dropped open as my classmates looked at me, looked at our teacher, then looked back at me. I was dressed in my “uniform” of long black dress and pointy witch shoes. My film noir tones of long black hair, black shadowed eyes and unnaturally white face were broken by the slash of bright red lipstick. The only thing brighter was my blood red Dracula medallion. I thought the answer to her question was pretty obvious. But as I looked at my classmates and then back to my teacher, the words that came out of mouth were “No, no I’m not.”

My classmates smirked, knowing it for the lie it was, but understanding the reason. I felt like Peter denying Jesus but I needed to pass the class. I was afraid that if I answered truthfully, she would think I was silly and mark me down. Her relieved sigh made me think I was right. When she then launched into a brutal attack on “people who romanticise death,” I knew I was right. I passed the class and went on to university where I continued my gothic pursuits. It was a lonely path in 1980’s Australia. Happily the world has changed!

I was going to continue this post by talking about a gothic art exhibition I went to, but I’m taking a different path. Thanks to the awesome Christine at witchlike, I found out that February is Women in Horror Month. I can’t believe I didn’t know this! One of the goals of WiHM is to celebrate women in the horror genre. As part of this celebration I thought I would share some of the beautiful paintings Anna Gerraty did for our Dracula Tarot. I began work on the tarot deck when I finished university. I was so lucky to find Anna, an artist more at home in the world of fairy than vampires and horror. Happily she was seduced by Dracula as so many of us are. Her paintings combine her whimsical fairy roots with the romance of the Victorian era and the horror and blood of the vampire. 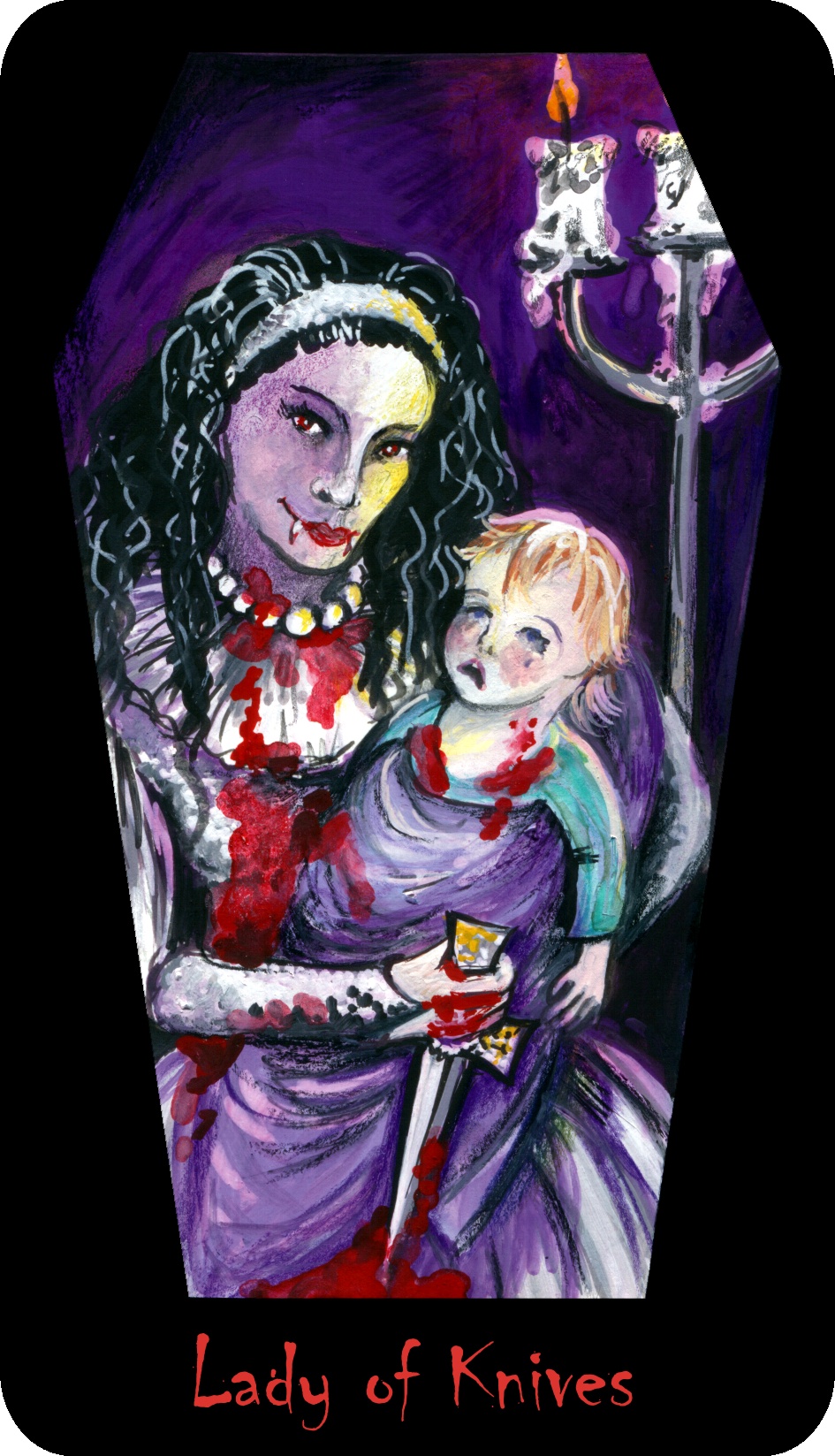 Mina Harker being marked as unclean by Van Helsing while the Weird Sisters implore her to
“Come, sister. Come to us. Come! Come!”

Can you resist the siren call of our sisters in horror? I know I won’t!