Friday the 13th is nearly here, and while some of us celebrate this day, many fear it. In Melbourne, this Friday the 13th also coincides with a Dark Moon. As some people also fear the moon, this may indeed be a very scary time for that unfortunate few.

The word phobia is derived from phobos, the Greek word for fear. Add it to the end of a word and you have a term for the fear of something.

snake on a beach

If you aren’t terrified yet, Monday the 16th might tip you over the edge as July 16th is World Snake Day! The day was created to help people learn about snakes, understand their role in our world, and hopefully combat some of the fears associated with them. The fear of snakes is called ophidiophobia, derived from “ophis” the Greek word for snake. 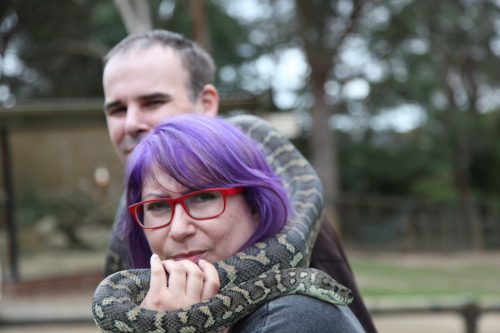 I was born in the Year of the Snake and have always felt connected to them. I love touching non-venomous snakes and don’t mind having a python draped around me. When I tell people I don’t have a fear of snakes, I mean I don’t have a phobia or irrational fear of them. But having grown up in Australia, I do have a rational fear of snakes. We are home to some of the world’s most venomous snakes. Being alert around snakes is ingrained in us. Having encountered a few of these deadly creatures in the wild, and in my backyard, I can tell you the first thing that runs through me is fear! Happily the next feeling that runs through me is fascination. I love watching them from a safe distance, keeping my eye on their movements as they slither back into the wild or the snake catcher comes to collect them. So while I do have a respectful fear of snakes, I don’t have an irrational fear of them.

Do you suffer from any of these phobias or will you be celebrating Friday the 13th, the Dark Moon and World Snake Day free from fear?