When I saw that Bob T. Panda from The Panda Chronicles had nominated me for the Real Neat Blog award (thanks Bob T!) the first thing I thought was “Yay!” The second thing I thought was “that reminds me of the Damned song – Neat Neat Neat”. So, in the spirit of my favourite punk band, I’m going to claim this award in a punk way – by messing up the rules! 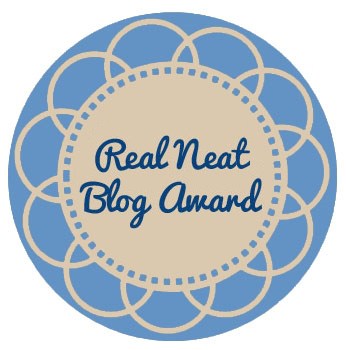 Some of the rules:
Thank the person who nominated you – done.
Answer their questions – okay.

If you could be an animal, which one would you be?
A Giant Panda like Clint Recession.

What kind of cuppycake are you, and why?
A Black Forest Cuppycake because I like black and I like The Cure song A Forest.

If you could change any event in the history on people on earth, what would you chose?
The saying “orange is the new black” became popular thanks to a certain show. But as far as I’m concerned, black is the old, new and future black. So I would try and stop anything orange from becoming popular or powerful – except at Halloween, because – you know – pumpkins.

What is your favorite city (other than the one you live in) that you have visited?
Brasov in Romania. They have vampires and really nice cakes.

If you knew you only had one year to live, what would you do?
Try and find a vampire to convert me. Otherwise eat and drink as much as I want and then tell people what I really think of them just before I die.

What do you wish you had done in your life that you have not?
Become a vampire.

More rules:
Make up your own questions to ask your nominees – done – sort of. I’m not going to make up my own questions, I’m going to “borrow” Bob T’s instead.

Nominate other blogs for the award – here I go! There are so many that I want to nominate so I am going to nominate all the blogs that follow me and all the blogs I follow. So jump in, grab an award and answer “my” questions above. Or feel free to participate in any way you like.

But I am going to break my own rule by nominating one blog. This person hates getting awards and responds in a way that most punks would envy. So hit me with your best shot NCM!

Drawing culinary inspiration from one of my favourite Damned songs, Smash It Up, I’d like to share a recipe for Smashed Avocado. I mean, what could be more punk than healthy, green avocado balanced on a wholegrain slice of bread and maybe served with a side of quinoa? Hell no! If I’m smashing any food up it’s going to be potatoes. And then I’m going to splash them with oil and throw grated cheese on them – now that’s punk! And don’t expect precise measurements for this recipe. You’ll get ingredients, basic instructions and a photo, but that’s it 🙂

Peel, cut up and boil some potatoes. (You can leave the skin on if you want but I like them peeled).
Drain and cool.
Preheat oven to 220C / 430F.
Lightly oil a baking tray.
Add the potatoes then smash them with a fork until they just start to break. I smash some more than others for variety.
Splash extra oil over them.
Sprinkle with salt.
Bake for 15 minutes.
Remove from oven and flip them over.
Throw on some grated cheese.
Return to the oven and bake for another 15 – 20 minutes or until they are golden.