I have often wondered about the concept of the Triple Goddess and her relationship to women’s cycles. Traditionally, the Triple Goddess is envisioned as the Maiden, Mother and Crone. These three phases are supposed to correspond to the three phases of a woman’s life which are symbolically linked to three blood mysteries; menarche/menstruation, childbirth and menopause. As a number of my female friends are about to celebrate their 50th birthdays and are also experiencing the beginnings of menopause, I began to wonder whether they were indeed entering the time of the Crone or some intermediary stage. When I interact with women who are much older – say in their late 70’s and beyond – there is a depth of wisdom and solitude that I do not find in my younger friends. It appears to me that women in their late 40’s and early 50’s are being prematurely hastened into the role of the Crone way before their time.

As a woman in the middle of the “Mother” phase I always felt as though there was another phase of my life to explore before becoming the Crone. In some ways, by focussing solely on female biology, the Triple Goddess, as a metaphor for female transitions, can be limiting. Interestingly, the Triple Goddess is not only linked to the number three but also to the number four. The Triple Goddess is connected to the phases of the Moon and the Seasons which all have four aspects. The Waxing New Moon is the Maiden and associated with Spring, the Full Moon is the Mother and linked to Summer and the Dark Moon is the Crone and corresponds to Winter. However, one Season and one Moon phase are missing from this scenario; Autumn and the Waning Moon. This omission made me consider that one phase of a woman’s journey may also be missing.

Synchronistically, it was at this time that I discovered a book called “The Women’s Wheel of Life: Thirteen Archetypes of Woman at Her Fullest Power” by Elizabeth Davis & Carol Leonard. They too discovered that one phase of a woman’s life journey may be repressed by focussing on a three-phase cycle. Significantly, this revelation came to Carol Leonard whilst painting a mural depicting the four Seasons represented by four dancing Goddesses. Although Spring, Summer and Winter Goddesses were easily visualised as Maiden, Mother and Crone, Carol found it difficult to envision an Autumn Goddess. What she eventually created was “an image of a queenly woman, draped in rich robes of deep red and gold, holding a base of harvest goods”. She named this aspect of the Seasonal Goddess the Matriarch. When Davis and Leonard offered the image of Woman as Matriarch to a workshop “all the women in their middle years unanimously said, “Yes!” and breathed a collective sigh of relief”. Is it time to expand our notion of a Triple Goddess and unveil a fourth face? I would say “Yes!”

A Four-Fold Goddess corresponds to other Spiritual Traditions that utilise four-fold concepts. Many religions invoke the four directions – South, East, North and West – or the four elements – Earth, Air, Fire and Water. Some forms of Witchcraft follow a Seasonal calendar that includes four Major Sabbats – Samhain, Imbolc, Beltane and Lammas – and four Minor Sabbats – Autumn Equinox, Winter Solstice, Spring Equinox and Summer Solstice. Other Witches follow a Lunar cycle celebrating the four phases of the Moon – First Quarter, Full Moon, Last Quarter and Dark Moon. Astrology utilises the four elements and Tarot also has four suits – Pentacles, Swords, Wands and Cups which also relate to the four elements. The Four-Fold Goddess can be linked to any and all of these systems.

The hidden fourth face of the Goddess is also a particularly powerful aspect of a woman’s life journey. Rather than go straight from the Summer Full Moon phase – a time dedicated to nurturing others, to the Winter Dark Moon Crone phase – a time of impending withdrawal from the world, the Autumn Waning Moon Queen allows us an intermediary time where we can not only reflect on our lives but also have some say in world affairs. The Autumn Queen phase allows us the time to enjoy our own personal power in the world. As women we have probably spent most of our time nurturing others but now the time has come to nurture ourselves. The biggest challenge for women is coming into contact with our own power. Perhaps by harnessing the power of our Autumn Queen our task may be simpler.

By focussing on a three-fold rite of passage intimately connected to our biology, we may miss one of our more powerful passages – our initiation into Autumn Queens.

I am looking forward to moving into the role of Autumn Queen, for although I love the idea of being a Crone, I do believe it is a role related to a much later stage in our lives. 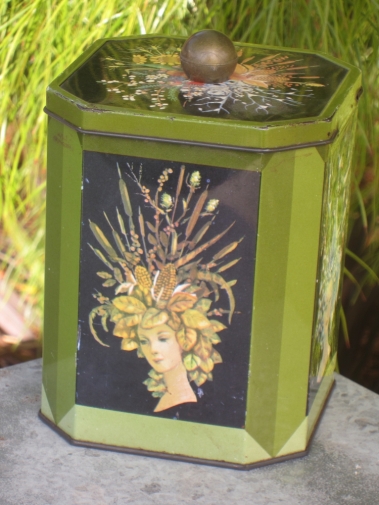 I wrote this article 15 years ago at the ripe old age of 35. So if you’re good at maths you’ll see that I’ve reached my Autumn Queen stage – I’ve turned 50! Do I still believe the words I wrote all those years ago? Do I still feel we need an Autumn Queen archetype? Yes I do!

The lead up to my 50th birthday was not what I had planned. I had envisioned massages, facials, manicures and much needed pedicures. Instead my birthday was shadowed by the illness and death of one of my beloved dogs. The Crone had come to take something away from me and I wasn’t ready. When I looked into her face through my tears I knew one thing – I was no Crone. I wasn’t ready to quietly slip into a time of self-reflection, acceptance and withdrawal. I was leaving the Mother stage behind with the death of one my children and I was fighting all the way – for him and for myself. There was no way I could transition from a Mother to a Crone without an intermediary phase. For me that phase is the Autumn Queen. As befits an Elder Goth, I took on the Autumn mantle of the Queen shrouded in death and darkness. I embraced becoming an Autumn Queen with great sadness but also with great wonder. Against the odds I had a wild 50th birthday. It was in fact the best birthday I have ever had. For one weekend I put aside all my worries about others, all my pain and all my fears for what the future held. For one weekend I really lived in the moment. I concentrated on having a fabulous time and made sure I was a pampered and well looked after Autumn Queen. It felt wonderful. And it’s only the beginning of my journey.