I had just submitted my thesis. It was the end of an eight year journey that had been exhilarating and exhausting. I remember walking down my driveway with a huge smile on my face. I was so happy; I was so free. But a visit to someone would change that. By the end of 1999 I would discover that I had been betrayed and hurt by those closest to me. I would ring in the new millennia with only my long term partner and a couple of close friends. I have talked about the time after the Fall and how I came through it – which I did! – in A Personality of Pandas.

Moving forward, by August 2013 I had fought many personal battles and won many victories. I was again in a great place. But another challenge was on the way, and it would be followed by more. I was about to be tested again!

On the first of August my partner Paul was unexpectedly retrenched from work. As the main breadwinner this threw all our financial security into disarray. It was one of my greatest fears. I’ve never worried about myself as I have lived with little money but supporting four high maintenance dogs was my deepest concern. Sadly, by the end of August we only had to worry about three dogs as our beloved Pug Wolfy was euthanised after a long battle with cancer. August 2013 is not a month I want to live through again.

But in October 2013 we were lucky enough to travel to China (the trip was paid for one week before Paul was retrenched!) I think this trip was one of the defining moments of my life and gave me the strength to face the challenges that just kept coming. I have written about this extraordinary journey in A Glimpse Of China. 2013 ended and we were doing okay but “slightly” stressed by the lack of work and lack of income.

Early in 2014 we were visited by another of my greatest fears – a venomous snake in our backyard! Again I’m not bothered by snakes but I am bothered by them being near my dogs. This three foot beauty was right near my babes but luckily we enacted our snake plan and we all survived the visit alive – even the snake 🙂 After it was all over, my first thought was “we have to sell the house!” My second thought was “I won’t be run out of my home by a snake!” The second thought won. 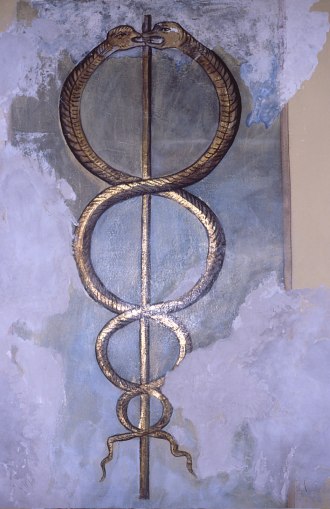 Being a former Christian, and now Vampirologist and a Pagan Witch, snakes aren’t just snakes, they are mythological creatures of supreme power and magic. I wanted this visit by the snake to be more than just “better fix the snake proof fencing” and more a lesson from an archetypal creature. My desire to project an esoteric meaning to the encounter was influenced by the nightmare I had the night before the snake visited. I had a dream that one of my dogs was bitten by a snake and was dying as I drove her to hospital. I woke up shaking and couldn’t get the dream out of my mind. Did the snake send a forewarning of its intended visit? I don’t know, but it was very polite and didn’t bite my dogs or us and for that I am grateful.

After a few tarot readings and taking a long, hard look at where I was, I began to think that the snake was warning me of enemies in my midst – enemies very close to home. Was I about to experience similar betrayals to the Fall of 1999? In a way I was, but it would be in no way as devastating as it was the first time. In fact, realising that I meant much less to some of my closest allies was liberating and healing. It allowed me to shed some dead skin I was carrying and for the first time in a long time I felt lighter.

After the Fall I closed myself off from friends, wary of being used and abused again. In August 2007 (what is it with August!) I welcomed two of my eventual four WolfChildren into my home and with them came new adventures and new friends. Some of these friends remain close and dear while some were not the friends I thought and they are no longer a part of my life. But what I kept focussing on was the bad friendships, the mistakes, and what I kept failing to see was that even during the Fall I had friends who had stood by me and they are still with me now!

Unlike Eve’s snake, this snake didn’t help cast me out of Paradise but showed me that I had returned to Eden. I had what I had before the Fall, what had sustained me through my childhood, guided me through my adolescence and stood by me through my twenties, thirties and forties – friends – great friends! It was this realisation that helped heal some of the last of the wounds from the Fall.

There is one wound left to heal – perhaps the biggest of them all and it’s one I keep avoiding. I wish I had addressed it earlier because I think it precipitated another visitor to come and push me onto the right path. Yep, we had another venomous snake come into our yard and on a very special night – the eve of the Southern Hemisphere Summer Solstice. This time the dogs were safe inside so it was much less stressful. While waiting for the snake catcher I went outside to keep an eye on the snake. I was mesmerised by its beauty, its grace, its power and its deadliness. I wanted to reach my hand out and touch it – but naturally I didn’t!

As with the last visit I also had a nightmare about a snake the night before. Again I woke in a sweat and couldn’t shake the dream. Again I wonder was it a warning of a snakey visit? And again I don’t know. What I do know is the next path of my journey. I’d had an inkling of what I was missing before the snake visit but bizarrely enough the snake catcher said something that reinforced my suspicions. I have a new path to travel in 2015 and I am very excited!

As the year winds to a close I am happy about so many things. Paul finally got a job in October 2014, the day before Northern Hemisphere Halloween! I have made so many fabulous new friends through the Panda Chronicles blog and have strengthened the friendships I already had. A few friendships and relationships have ended, but I have let them go without remorse or pain. I am happy for what they have taught me and the way they have shaped my life. 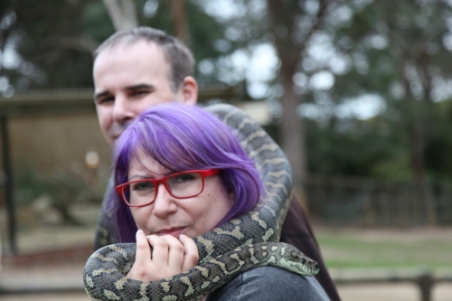 For me, 2014 started and ended with a visit by a snake. These visits had many things to teach me, and I am grateful. I feel like I have finally left the Fall behind and that I am back in Eden, ready for another journey. The time of fear and panic attacks is hopefully over. I know the world is a fun place to live in and I not only believe in friendships I celebrate them! There is one more lesson that I learned from my snakes – but I’m keeping the snake’s final message a ssssecret – for now 🙂

Happy New Year to my wonderful Friends!
Looking forward to continuing our wild ride together in 2015 🙂