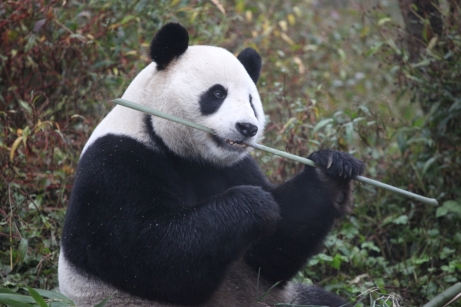 Bifengxia Panda Base is in Ya’an, approximately two and a half hours drive from Chengdu. Originally built as a research facility, it only became a tourist spot after the devastating earthquake in May 2008 destroyed the Wolong Panda Reserve. The pandas from Wolong were moved to Bifengxia and where the pandas go, so do the people!! 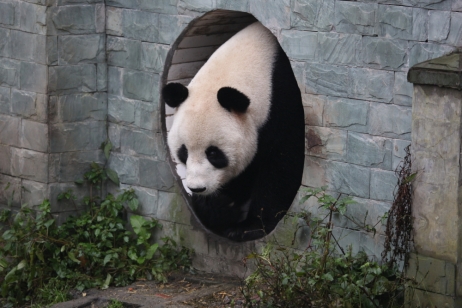 We arrived at Bifengxia just as it opened and were treated to the sight of empty enclosures – we were so early the pandas weren’t even awake yet! We waited at one enclosure and saw a panda poking its head out of its den. It ventured out but when it saw there was no bamboo, it went back in. The attendants arrived armed with bamboo and the hungry but happy panda got down to the day’s business – eating! We saw a few more of these older pandas before arriving at the much anticipated Panda Kindergarten!

In the first Panda Kindergarten enclosure we were greeted by the vision of two adorable cubs playing and rolling around. There was even a yellow swing in their yard. They were eagerly waiting for the attendant to bring them milk in metal bowls. After slurping down their drinks, the attendants used a tea towel to wipe the face of one of the baby pandas. When they went to the next panda it decided to resist them and rolled around in the spilt milk instead. The attendants were laughing and trying to grab and clean up the cheeky cub. I thought “what a hard job they have – and how do I apply!” 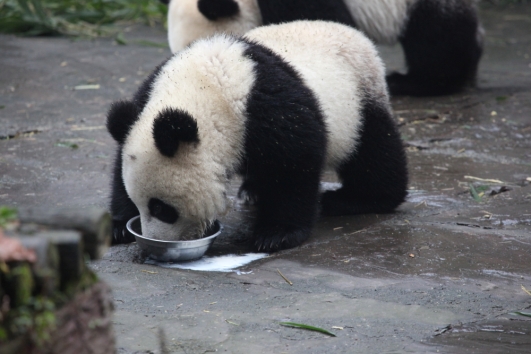 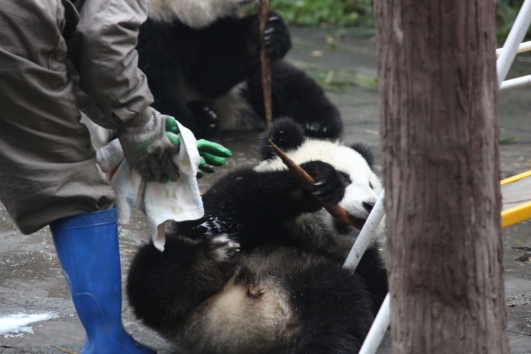 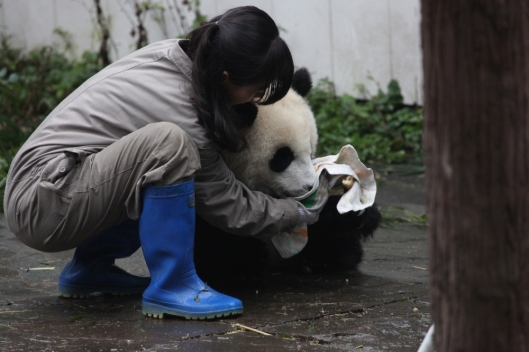 The next Panda Kindergarten enclosure contained five young cubs. Their enclosure also contained toys including a plastic slide and rocking horse that have been featured in many adorable photos! There was fresh bamboo and the pandas were munching away. We watched them play, frolic and then eat. Typical pandas, they weren’t in the mood to do much more than eat so we thought we would check out the rest of the park before returning to see if any antics would be on display. 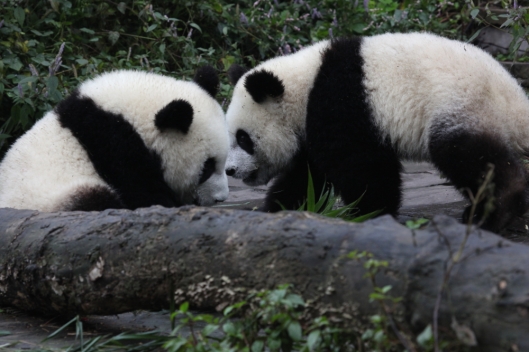 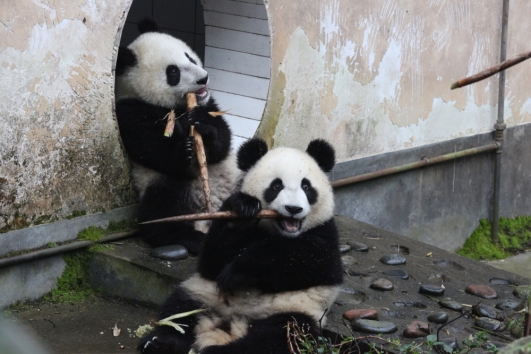 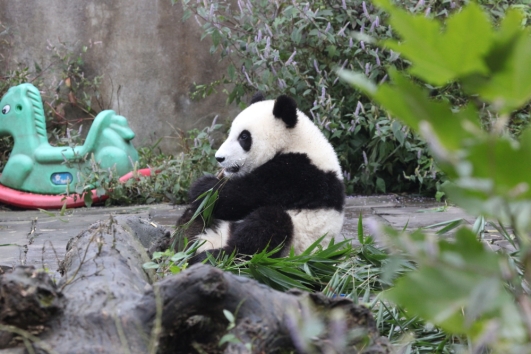 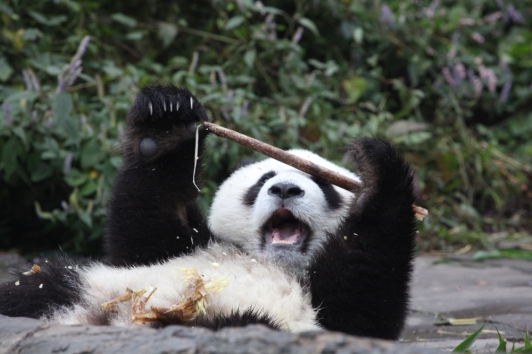 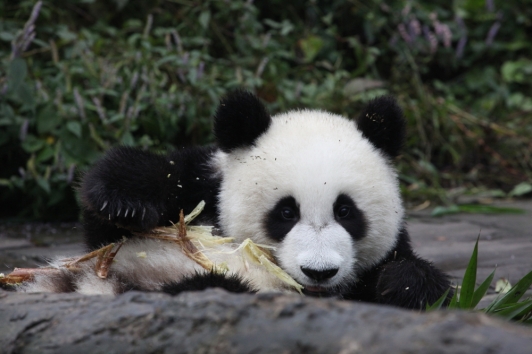 The next section we visited was the overseas born panda section. One of the pandas housed there was Tai Shan Butterstick! He was nicknamed Butterstick after a zookeeper at the National Zoo in Washington said that he was the size of a stick of butter when he was born. We were so happy to see him. We snapped photo after photo of this handsome bear. We visited all the other overseas born pandas before returning to the Panda Kindergarten. 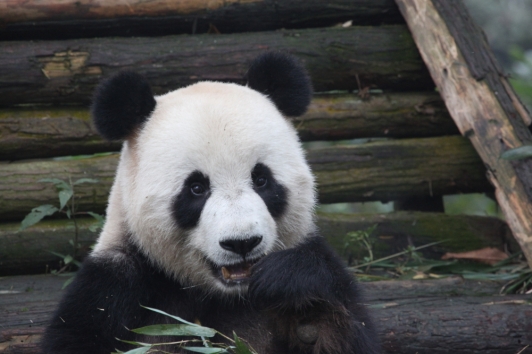 And we are so glad we did. The five young pandas had finished their bamboo and were ready to rumble! They fought with each other, chased each other, rolled around together and then, to the delighted gasps of everyone watching, they ran up trees and showed us just how arboreal pandas really are. We watched spellbound as one daredevil panda travelled along a tree limb and then kept walking along, even though the limb was getting thinner and thinner. Then, graceful as a tightrope walker, the nimble panda turned around on the limb and promptly sat down. We all screamed as we were terrified that the little bear was going to fall. But the panda settled into a koala-like pose and amazingly didn’t fall. The pandas settled into the trees where they would spend most of the afternoon. It was sadly time to leave and my heart broke a little as I realised this was the end of the panda part of my trip to China. 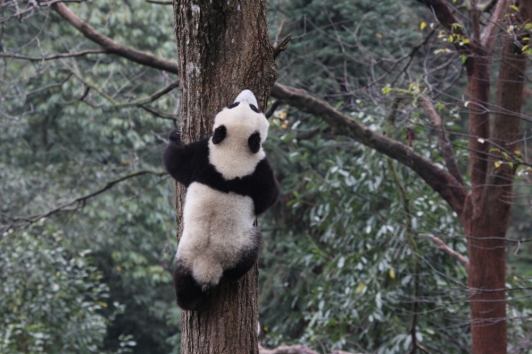 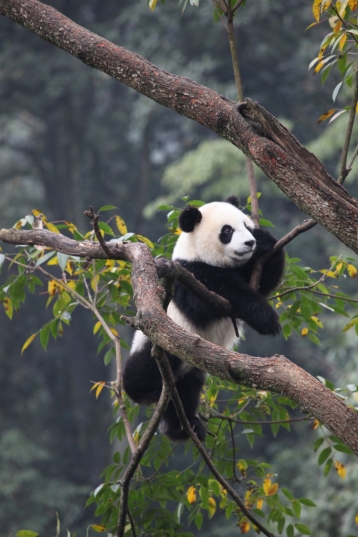 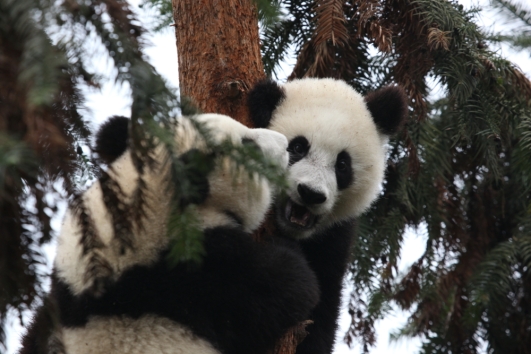 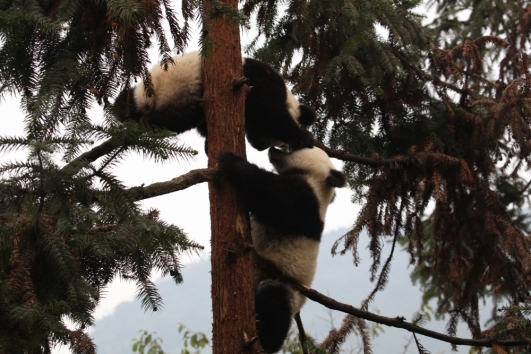 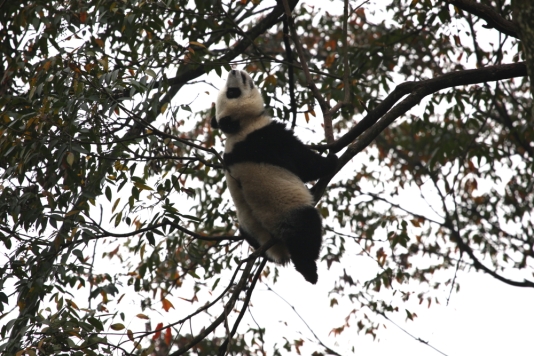 Bifengxia Panda Base is in a mountainous area with spectacular peaks, deep gorges, waterfalls and beautiful forest. There are trails through the gorge for either short or long walks. Paul and our guide Haba chose to go for a short one hour trek through the gorge which Paul said was spectacular. I chose to stay behind in the car with the driver and meet Paul at the end of the track where there was a waterfall and a 91.8 metre tall elevator that takes travellers from the bottom of the gorge up to the carpark. It is apparently the tallest sightseeing elevator in the world. The view from the top down over the waterfalls was spectacular. After an extraordinary day, we returned to our hotel for our final night. 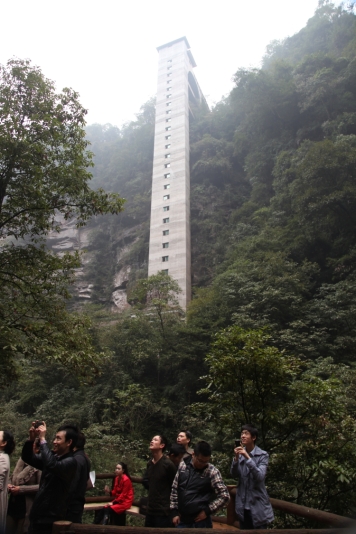