Jonathan Harker’s adventure in Transylvania takes up the first four chapters out of twenty seven in the novel Dracula by Bram Stoker. Yet this small part of the novel contains some of the most memorable scenes and lines from the book. When I went to Romania in 2005 I couldn’t wait to retrace Jonathan Harker’s journey from Bistrita to Castle Dracula. This was written shortly after I returned 🙂

In the footsteps of Jonathan Harker

A hotel recommended by Dracula himself was definitely a place I wanted to visit. Luckily for me The Hotel Coroana de Aur, (The Golden Crown Hotel), which did not exist in Stoker’s time, has since been built in Bistrita to capitalise on the burgeoning popularity of Dracula tourism.

As I arrive at The Hotel Coroana de Aur, I cannot help but feel that I am stepping into gothic literary history. At first the foyer of the hotel seems like any other until I spy the Dracula and Bram Stoker postcards, the hotel stationary which features Bram Stoker’s face and the store selling a variety of vampire paraphernalia. There is also a Jonathan Harker Salon.

As I step into my room I am disappointed to discover that they are standard hotel style, with barely a hint of the vampiric. But my disappointment is allayed the next day when I take breakfast in the Jonathan Harker Salon. Draped in the traditional vampire colours of black and red, and decorated with animal heads, flying bats and dripping candelabra the salon offers a feast for the eyes as well as the body. Devouring a sumptuous buffet breakfast, surrounded by such paraphernalia, is a real gothic treat. I am reluctant to leave the salon, but equally eager to continue my journey. Following in the footsteps of Jonathan Harker, my next destination is the famed Castle Dracula.

The castle is on the very edge of a terrible precipice

The road from Bistrita to Piatra Fantanele is the same road described by Stoker over a century ago. The long journey takes in the Borgo Pass, the place where Jonathan meets the horse drawn carriage of Count Dracula. After a long and fearful journey, Jonathan reaches the dreaded Castle Dracula. But I enjoy a relaxing car trip, not to a haunted castle, but to a modern hotel.

el Castel Dracula is another hotel created to take advantage of Dracula tourism. Built where Dracula’s Castle is described in the novel, the hotel is a curious construction. The strangely greyish purplish building is both gothic and comically vampiric. There is even a cemetery on the grounds. A small market on the hotel grounds stocks local souvenirs and Vlad Ţepeş and Dracula memorabilia. The hotel lobby also stocks an assortment of Dracula gifts.

After freshening up, the staff offer me a guided tour of Dracula’s Dungeon. I’m excited as I slowly walk down the stairs into the candlelit room. There is a coffin in the corner and I move forward to take a closer look. The staff have a surprise for me which I won’t reveal, but I screamed, loud and hard, but not before swallowing a few Aussie curse words. The staff are ecstatic at my response and after I catch my breath, we leave the dungeon for the next unsuspecting guest.

After dinner I return to my room which boasts beautiful views of the famous Carpathian Mountains. I sit and drink champagne, watching as darkness creeps along the mountain tops. It’s not hard to picture wolves, and other creatures, roaming free in the mountains. Finally I retire to sleep contented on a bed whose bedhead features the dragon motif of the Dracula family. I have enjoyed following in the footsteps of Jonathan Harker, but tomorrow my journey takes a different turn.

In the novel, Jonathan jumps out a window of Castle Dracula and is eventually found physically and mentally traumatised in a hospital in Budapest, Hungary. I, not surprisingly, chose a different way to end my journey.

Heading for Bucharest, the capital city, I spend my final night in Romania at The Count Dracula Club, a gothic club that truly caters to the vampirically inclined. Themed rooms and a downstairs dungeon are some of the treats that await the diner. I am lucky enough to be there the night of a Dracula show when the Count himself makes an appearance. Quoting from the novel in both Romanian and English the dashing Count cavorts around the restaurant, swishing his black cape and menacing the willing patrons. The menu contains Dracula themed dishes and vampire inspired cocktails are sipped between courses. I finish the meal with a glass of ţuică, the traditional plum brandy. My Jonathan Harker journey is almost at an end. Thankfully it is not with madness and despair that I end my trip but with an evening of food, wine and entertainment.

Like me, Jonathan Harker has a great love for food and drink. There are a number of passages in the novel where Jonathan describes the food and drink he is enjoying in Transylvania. He even writes the names of some of the dishes so he can get Mina to cook them when he gets home! When I returned from Romania I also brought home a love of Romanian food and a deep desire to know more about this cuisine. Below is my version of the classic Romania breakfast dish that both Jonathan and I ate and loved in Romania.

I had for breakfast more paprika,

and a sort of porridge of maize flour which they said was “mamaliga,” 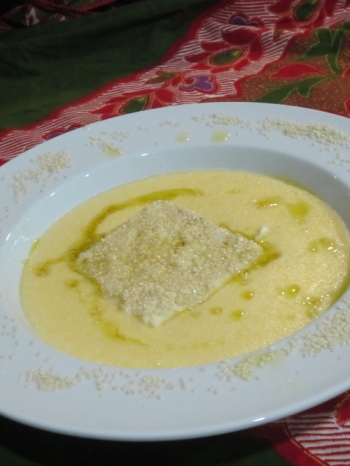 Method
Preheat oven to 200C / 400F
Drain feta and dry with paper towel.
Slice feta in half.
Pour half the oil in the bottom of a baking dish.
Place feta side by side in the dish.
Drizzle with remaining olive oil and honey.
Sprinkle with sesame seeds.
Bake for 10-15 minutes or until the feta is soft but not melted.
While feta is baking bring the water and milk to a low boil in a saucepan.
Add the salt and stir through.
Pour the cornmeal in a slow stream then turn the heat to low.
Stir with a wooden spoon until the mixture is smooth and thick, about 10-15 minutes.
Stir in the butter.
Place cornmeal in bowls and top with baked feta.

Artwork for the Dracula Tarot by the wonderful Anna Gerraty